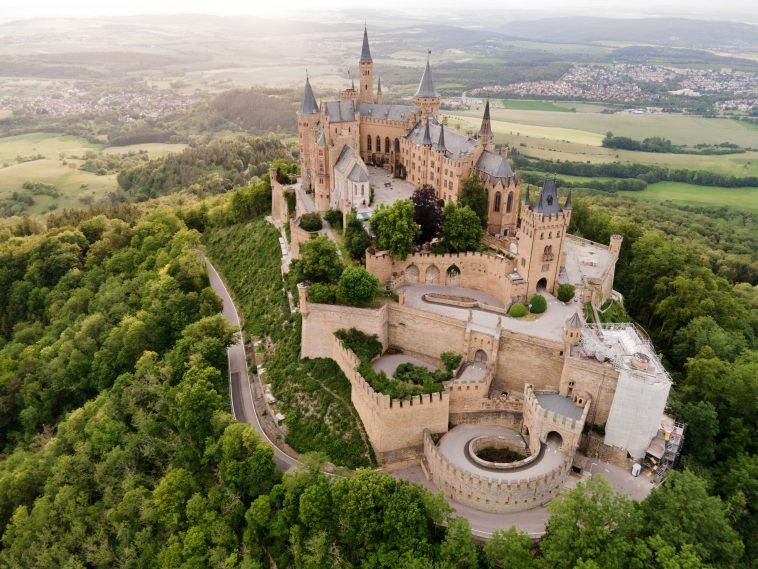 Germany is a country that has a lot to offer when visiting on vacation. To the north, you have the massive modern port city of Hamburg to the west and the world-renowned capital city that is Berlin to the east. In the south, you can find the beautiful region of Bavaria, dominated by the high alpine peaks of the Alps. While Germany is a very large country by European standards, you don’t have to travel very far to find a castle to visit. With as many as 20,000 castles in the country, it’s hard to visit any town and not see at least one or two with some of the best castles in Germany.

Personally, I find it impossible to recommend any other castle more highly than Neuschwanstein, and for good reason, as you can see. Neuschwanstein has a lot going for it so let’s get into it. Nestled in Bavaria on the German Austrian border, this Castle is flanked by beautiful peaks to its southwest with large pristine lakes nearby. While this is possibly the most stunning castle on this list, it’s also the youngest.

Commissioned in 1868 by King Ludwig II of Bavaria as a monument to German composer Richard Wagner, as with any fairytale, the story behind this castle’s creation is full of mystery and intrigue. It’s a tragic tale of a young prince with a passion for music, art and architecture, who ascended the throne as a teenager and ruled as a recluse until his untimely (and mysterious) death in 1886 at the age of 41.

But enough about the history of the castle, what’s it likes to visit today? You will need to be either ready for a short hike or pay 15 euros for a bus to ascend from the base of the mountain to the castle gates. While many of the rooms in the castle are incomplete from a lack of funding near the end of its construction there are a few rooms that have been fully realized in Ludwig’s vision. You will need to pay for a tour to visit the interior also.  On a side note, there is the lower castle of Hohenschwangau right next to this one. So, visiting Neuschwanstein is like visiting two castles for the price of one.

Now we move to western Germany to the state of Baden-Württemberg for the next castle.

Hohenzollern Castle is the ancestral home of the imperial family of Germany, the House of Hohenzollern. Their monarchy ended with the abdication of Kaiser Wilhelm II at the end of World War I. And, many of the dynasty’s royal artifacts are displayed here, including the Prussian royal crown and items belonging to Frederick the Great.

The original castle was built in the early 1200s but was destroyed in 1423. A bigger and more fortified replacement was built in 1454 but had fallen to ruin by the beginning of the

19th century. Unlike Neuschwanstein, Hohenzollern has been fully finished on the interior and is still inhabited by Prince George from time to time. You can tell when the prince and his family are staying at the castle by the Prussian flag flies over the castle, while the flag of Hohenzollern-Sigmaringen is used by the Swabians. With that being said you can still take tours and visit the castle with over 350,000 visitors per year, making this one of the most popular castles in Germany.

The ruins of the once-grand Schloss Heidelberg (Heidelberg Castle) rise up on a rocky hilltop over the university town of Heidelberg. While young students and busloads of visitors trundle about below, Heidelberg Castle presides above, drawing an estimated 1 million visitors a year.

Once a Gothic masterpiece, the Castle of Heidelberg has encountered turbulent times. The earliest structure was constructed in the early 1300s and continued to grow and expand until it became two castles by 1294. Dark times were ahead, however. It was plundered and burned by the French army in 1689, then struck by lightning 100 years later. Lightning struck twice as another bolt in 1764 destroyed what little had been rebuilt. The ruins were further plundered to use the red brick to build new houses in the town.

Unlike many German castles, the  Castle of Heidelberg never regained its original glory and still lies in partial ruins. But the ruins have a ragged charm of their own. Each building highlights a different period of German architecture and the ruins are considered the symbol of German Romanticism. The Castle of Heidelberg is one of the highlights of the German Castle Road.

Burg Eltz, or Eltz Castle, is one of the most charming castles in all of Germany. It lies in the west of Germany, between Koblenz and Trier, and is surrounded on three sides by the Moselle River. Visitors are immediately awed walking through the part in the trees and seeing the fairytale castle on a pedestal below. Guests of the castle can explore parts of the Eltz family home. This family has resided in the castle since the 12th century for an impressive 33 generations.

Visitors can walk the small grounds where the castle sits on an oval rock, 70 meters above the river in a valley. The castle’s unique shape follows its unusual foundation. Guided tours offer an overview of life in a castle with details like the medieval plaster, consisting of oxblood, animal hair, clay, quicklime, and camphor. The castle is eight floors with eight turreted towers (at heights of 30 and 40 meters) and around 100 rooms.

Built in the early 11th century, Hohenzollern-Sigmaringen is located in the Swabian Alps in southern Baden-Wüttemberg, Germany. Keep in mind that the oldest parts of it are actually hidden underneath the rebuilt structures over the years. The Castle was almost completely destroyed by a fire in 1893 and had to be rebuilt. Destructions and constructions continued to take place up until 1902, with each construction leaving its mark in and around the castle.

Today, the prince and princess of Hohenzollern welcome visitors with guided tours through history at the castle.

Dresden’s Royal Palace was once the hub of power for the Saxon princes and kings. First mentioned in the 14th century as a castle complex, the four-wing palace structure was developed in the 15th century. After it was destroyed by fire in 1701, the palace was reconstructed under Augustus the Strong.

After air attacks during the last few months of the Second World War, the palace – with its approximately 500 halls and rooms – once again burned down to its foundations. Most of the valuable interior furnishings were lost. In 1985, reconstruction began on the palace to create a museum complex for the Staatliche Kunstsammlungen Dresden (Dresden State Art Collections)

The Imperial Castle atop the rocky promontory above Nuremberg was one of the most important fortified imperial palaces of the Old Holy Roman Empire.

The castle and the city served as the location for numerous imperial assemblies. From 1356 on the “Golden Bull” of Emperor Charles IV provided that every newly elected future ruler must hold his first imperial Diet in Nuremberg. Moreover, from 1424 the imperial regalia was safely kept in Nuremberg. Nuremberg was a very popular residence for the rulers in the age of the itinerant kingships and up until the 30 Years’ War. It was the central location of the empire.

The remains of the once stately castle complex towers over the place as if they were still guarding the community today. Strategically, the location for the castle was very well chosen. You have a wonderful view of the valley landscape. It is 514m above sea level and only shows the basics of which stately castle it once was.

The name Randeck is simply interpreted as Rundeck, referring to the one corner formation in the generally round keep.

Randeck lies on a single, protruding hilltop and merges into the rock slope to the south and west, while it drops backward, to the north and east, into a natural, steep rock ditch, which was never intended as a moat. And, at its front and rear ends is finished with a reinforced wall. Randeck Castle is one of the oldest castles in Bavaria

In 1818 the castle fell to the Kingdom of Bavaria. In 1838 parts of the castle collapsed, including the keep. As early as 1842, Crown Prince Maximilian of Bavaria had the complex secured and partially rebuilt. It was extensively renovated in 1975 and has been a tourist attraction ever since. Today the ruin is owned by the Essing market. 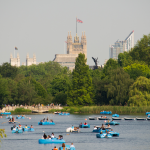 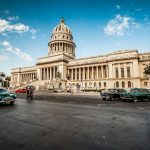