Oftentimes when we fly a lot from airport to airport, the architecture of the terminals can feel the same. Even when the facilities are new with modern architecture, they can feel copy/paste in design.

It’s important for airports to have architecture that reflects the destination because it gives a lasting impression to the passengers. Especially for passengers who are at airports for connecting flights, it gives them an insight into what the city/region is like when they can’t fully experience it themselves.

The following airports below embodies this concept of reflecting the destination through architecture.

Madrid’s Terminal 4 architecture reflects the deserts found north of the city with a modern twist. The architects designed the terminal in a way that will ease the stress from passengers. Careful illumination and warm color tones that mimic desert sands do just that. Glass panels in place of walls along with plenty of natural lighting is a theme throughout the terminal.

The illumination aspect is also an environmental measure, where it reduces footprint and upkeep costs. This allows the terminal to easily integrate with its nearby desert environment.

BOM’s airport architecture is a celebration of Mumbai, India’s new global and high-tech identity with references to its history and culture.

Upon arrival at Mumbai, you are greeted with traditional Indian design. The concrete canopy of Terminal 2 pictured above is an allusion to open-air pavilions of traditional Indian architecture. Its large columns represent peacock tail feathers, a bird native to India. Regional patterns and textures ornate the terminal in every corner. Even if you’re at BOM for a connecting flight, you already feel a connection with the region and its culture.

The Hajj Terminal at King Abdulaziz International Airport in Jeddah is nothing like you’ve ever seen at an airport. This terminal is mainly used for Muslim pilgrims traveling to Mecca yearly for Hajj. It’s one of the largest terminals in the world and can handle 80,000 pilgrims at once and 1 million over the period of Hajj.

The most obvious feature is its tent-like canopy that is a reference to the traditional tents found in the nearby pilgrimage city of Mina. It’s mostly an open-air terminal with its Teflon-coated fiberglass fabric canopy filtering out the desert sun. This allows the terminal to have plenty of natural light and comfortable temperatures even on a July day. The terminal is also complete with a bazaar and a mosque.

Singapore is a cosmopolitan metropolis set in a tropical rainforest climate. Its main airport manifests just that with the Jewel as the main attraction. The airport’s architecture integrates lush vegetation with modern architecture in harmony, much like the city center. It’s more than just an airport. SIN has amenities such as a shopping mall, movie theater, and even a butterfly garden.

As a result, the airport feels more like a destination that wows passengers the way Singapore’s attractions do to tourists.

Casablanca-based E2A Architecture combines Islamic design with ultra-modern architecture at Marrakesh’s main airport. The terminal is covered with natural light filtered through arabesque screens with Moroccan patterns that cover the windows and richens the overall ambiance. The rest area’s furniture is decorated with traditional fabrics native to that region. The airport also features a small bazaar and cafes that serve local food.

Marrakesh Airport is one of the few airports in the world that represents its nation. The terminal welcomes you like a time machine to Morocco’s rich history of arts, crafts, food, and architecture.

Opened just in time for the 2018 Winter Olympic Games, ICN’s Terminal 2 mirrors South Korea’s recent economic and technological prosperity in East Asia. The winged roof is an ode to the culturally significant Bonghwang, a mythical phoenix, while at the same time designed for structural efficiency.

Top-tier boutique avenues, restaurants, parks, lounges, and play areas in the airport reminds you of Seoul’s many famous shopping districts. The new Terminal 2 even has a Korean Traditional Culture Center that encourages passengers to engage and experience Korean culture.

Just like neighboring Singapore, Kuala Lumpur is located in a tropical rainforest climate where Japanese architect Kisho Kurokawa took inspiration for its design. The ceilings in the terminal are reminiscent of a common tree in the Malaysian rainforest. Secondly, the lighting simulates the filtered sun that shines through the leaves. There’s even a natural rainforest in the middle of the terminal showing off Malaysian nature.

Additionally, the shell of the roof is a reflection of traditional Islamic domes. The overall design of the airport integrates its surrounding nature and is not afraid to incorporate Islamic traditions with modern architecture. 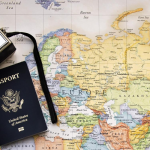 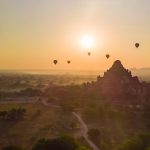