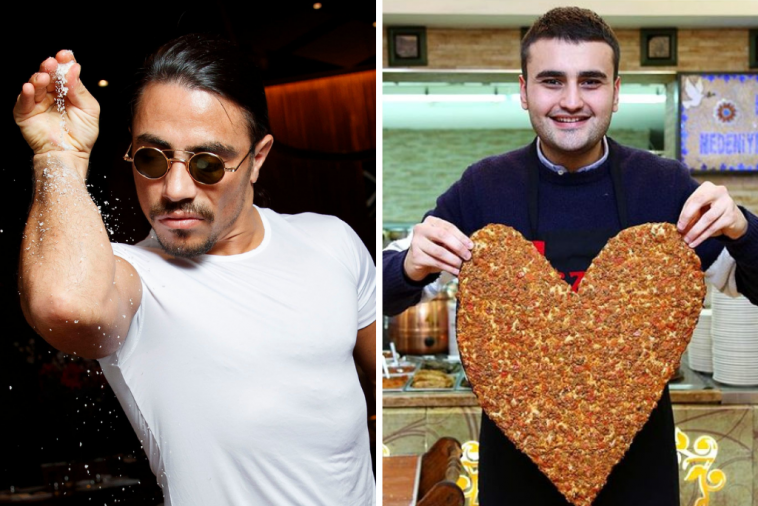 Turkish food is world-famous, delicious, and has a lot of variety, so do the chefs in Turkey! You may have heard most of the Turkish food influencers on our list. But can you tell what makes them famous? They all have a unique style and manage to combine delicious and creative recipes with a touch of fun. People just want to go to their restaurants since all these chefs in other words “Turkish Food Influencers” make their customers and their tummies happy. You can visit them on your Turkey trip since most of them have restaurants in Istanbul. While tasting their delicious food, you can get some unforgettable pictures, too!

Nusret is the most famous Turkish food influencer with 36 million followers on Instagram. You may know him as Salt Bae with his iconic hand gesture. He was a poor butcher in the first place, but thanks to his passion and determination, now he owns several restaurants all over Turkey and the world. Nusret became famous with his viral ‘Ottoman Steak’ video in 2017. He is cooking delicious meat with his unique style that attracts people. Football players like Ronaldo, Messi, Beckham and Hollywood stars such as Leonardo DiCaprio, Jason Statham… All these celebrities go to Nusr-et and have a picture with him making the gesture. Nusret’s food is so delicious and his character is unique that he is now one of the most known chefs in the world.

Did you see the chef who looks directly at the camera with his stable grin while preparing the food? Well, it is CZN Burak also known as Smiley Bae. He became famous with his enormous food and ingredients, I mean at least 40 people can eat his huge hamburger. He is usually cooking meat dishes like kebabs. This Turkish food influencer is also very helpful. He visits people with different needs, feeds stray animals in his free time. He opened a restaurant in Dubai with a show including projecting his picture on the world’s highest building Burj Khalifa. With his 24 million followers, CZN Burak is spreading positivity while cooking giant food in Turkey.

Have you eaten any mussels before? Some people don’t like it at all, and some people are obsessed with it. The ones who are crazy about mussels have a favorite place to go: Midyeci Ahmet, also known as Lord of Mussels. He started from a young age, and now Midyeci Ahmet is world-famous! He gained popularity with a smart idea; having a mussel eating contest and giving a BMW as the award. He is also dreaming of building an academy for the people who can’t receive proper education since he couldn’t go to the school. This Turkish food influencer has 1.2 million followers on Instagram and many visitors daily. If you are from the ones who can’t stop eating mussels, check Midyeci Ahmet for a delicious stop.

With his mustache resembling the one of Dali, Nedim Şahin is the talented owner of the restaurant called Baruthane Pilavcısı. It started with a small place that only a few people could fit in, but now lots of people visit his restaurants daily. Maybe his success comes from the recipe that he learned from his mom. He shares his food videos under the concept of “What are we going to eat today?” with great shows on Instagram. He even declared 13th May as World Rice Day and gave free rice to everyone. You should try different toppings on rice when you visit. The good news, his place is open on 7/24, so if you want to taste this delicious rice you can go there at midnight!

Cüneyt Asan is one of the most talented Turkish food influencers. Like most of the chefs on the list, he also started being a butcher from a young age. He is the owner of a restaurant chain called Günaydın. Günaydın is a perfect place if you want to enjoy a delicious dish with meat. Even Nusret and his family worked with Cüneyt Asan. He is really passionate about meat, and being a butcher that’s why he is so successful. With some publishing in the newspapers and TV, they became popular and a classic. Cüneyt Asan mentions that with co-founders of the restaurants, they opened the first restaurant with an American bar style and library in it. People were curious about this concept and amazing meat that they were waiting in queues just to get inside. Put this restaurant on your list for your trip to Istanbul!

You don’t expect a toast to be so popular in the rich Turkish cuisine, however with Tostçu Erol’s unique style and creative ideas, the toast became famous. His interest in social media and the internet made the place an attractive place for people to visit. Tostçu Erol is one of the very first places to have online ordering systems, what a success! From a small grocery to a well-known place; you can visit Tostçu Erol and try delicious toasts in both Ankara and Gaziantep. Check out this talented chef’s YouTube account and learn how to make tasty toasts!

Behind the meat section in a butcher, we see a talented woman: Semrah Doğan. Her passion for being a butcher and meat comes from her little ages. Butcher Woman started working early even if other people wanted to stop her. With his determination and talent, she became the chef of a famous restaurant chain. She mentions that the owner of the restaurant found her on Instagram, so being a Turkish food influencer must have helped her! Maybe the most important thing in being a butcher is to find good meat, and Butcher Woman tries to do her best to get the most delicious and fresh ones in the competitive market. She encourages women to believe in themselves cause if they do, they can achieve everything they want! Go visit her page and restaurant, enjoy your tasty meat, and get inspired by an ambitious woman.

Among all these Turkish food influencers, we have only one chef that is interested only in seafood. Faruk Cheff and his brother, Mehmet Gezen, have a restaurant in Ankara. With his 1,7 million followers on Instagram, he surely is a popular Turkish food influencer. If you want to try cooking seafood at home, you should definitely check Faruk Chef’s YouTube channel. He is showing step by step how to prepare delicious dishes with different sea animals. His amazing plates and delicious recipes made him famous among Turkish chefs. In 2019, Faruk and Mehmet Gezen were awarded Chef of the Year by a foundation, we can understand why!

This chef puts some technology into his food like salt and pepper! Kebapçı Yalçın has a video where he orders meat from the butcher and the order comes on a flying drone. Yes, you heard it right, he flies a drone just to get the ingredients for a delicious kebab. In his other viral video, there is a scene in an ambulance where a man is suffering, and Kebapçı Yalçın serves him a portion of liver and he comes back to life! He is one of the rising Turkish food influencers that gain popularity with funny and interesting posts. You should visit this funny chef and try his delicious kebabs when you are in Gaziantep.

Have you tried one of the most delicious snacks in Turkish cuisine, chee kofte? Normally, you expect chefs to be nice and kind to their customers, but it is not the case for Chef Ali. He has a place to sell chee kofte in Istanbul and it’s very popular. While selling the food he beats and humiliates the customers and they love it! Maybe because it is just different or they want to experience the funny process. Chef Ali became famous for his different style, high-tempo and mixed spices on chee kofte. He is now viral with his video where he calls a customer ‘child man’, people seem to enjoy that interaction. If you are looking for a different experience, go and find Chef Ali while he is probably shouting to a customer.

Are you ready for the weirdest restaurant experience ever? Well, welcome to chef Mehmet’s place, Şırdancı Mehmet. He has a unique style to entertain his customers. He became famous with his videos on Instagram where he puts various spices on the customers’ food and phones while they are trying to eat. In most videos, the customers act like they get furious and throw their phones or start to eat the plates. Yes, you heard it right; they provide edible plates for these theatrical videos. Şırdancı Mehmet is known for his typical Turkish offal dish. If you want to try funny-looking food and have a different experience in your Turkey visit, check this fun chef’s restaurant. 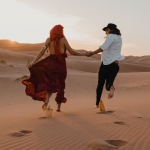 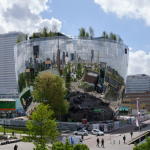