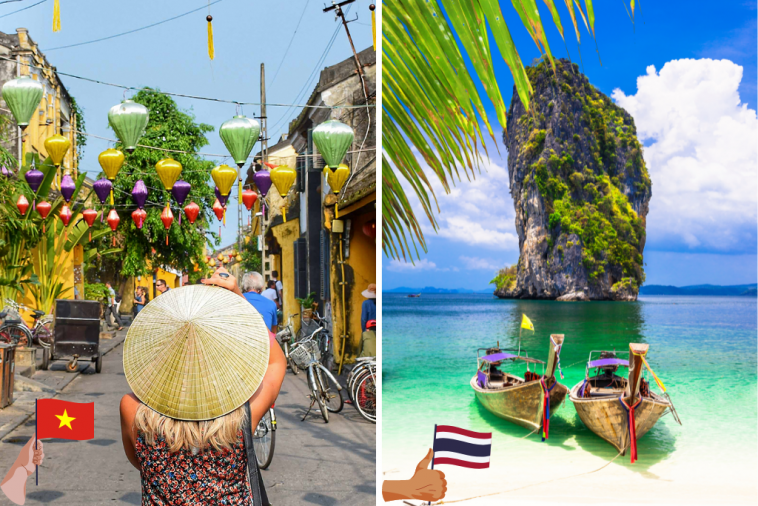 Vietnam vs Thailand is the matchup the backpacking world has been waiting for. Opinions are divided. The stage is set for two giants of the Banana Pancake Trail to go toe-toe. Eight tightly-contested rounds will decide who will come up on top and be crowned the undisputed (by me, at least) champion of Southeast Asia travel. Without further adieu, I introduce the heavyweight clash between these two powerhouses.

If you’re reading this, you are probably dreaming of white sandy beaches in a world without isolations and lockdowns. Maybe you are imagining yourself socially distanced from others in a different way, with your toes submerged in soft sand.

Vietnam starts this round with a stunning combination of Long Beach (Phu Quoc Island) and Quy Nhon beach (Binh Dinh). A one-two that would undoubtedly trump most countries’ best offerings around the world. However, Thailand is experienced and unfazed, aware of what they have in the locker.

Thailand responds with its own combination of Maya Bay, Koh Phi Phi, and Haad Rin, Koh Pha-Ngan. This stunning display staggers Vietnam as they are overwhelmed by the beauty of coconut trees, evergreen cliffs, and pearly-white sand.

Vietnam attempt to fight back with the popular My Khe beach (Da Nang) and Mui Ne beach (Phan Thiet) but there’s a sense of inevitability that this round is going to Thailand. The kingdom formerly known as Siam, lands the decisive blow with the picturesque Railay beach. The beach may only be accessible by long-tail boat, but that makes it all the more worth it. Round 1 goes to Thailand.

The bell rings as we enter the second round, Vietnam needs an instant reply. The Socialist Republic is just warming up and knows they can rely on the mountainous north, infinite rice paddies and towering limestone rocks like Vladimir Klitschko could rely on his jab.

Thailand certainly isn’t short of otherworldly natural beauty. Erawan Falls, Khao Yai national park and the Northern areas of Chang Mai and Pai would eclipse the majority of competitors. However, Vietnam edges this one due to the untouched, undiscovered, uncountable areas that are way off the beaten track.

Vietnam vs Thailand contest is already set up to be a classic to and fro contest, with one round awarded by the judges (judge*) so far. The third round is crucial! Not only for deciding the winner but also for your convenience when travelling in these countries.

Vietnam can boast an incredibly cheap north-south hop on-off bus route that is extremely convenient for any backpacker. For braver individuals, you can hire a motorbike for as little as $4 dollar per day and soar up the mountains without a care in the world.

Thailand can counter with equally cost-effective options, island-hopping between the likes of Phuket, Koh Tao and Koh Samui is seamless. The efficiency and effortlessness of getting around the popular tourist destinations of Thailand are arguably the best in the world. The well-trodden pathways between each stunning spot help it edge this round.

The fourth round kicks off where you are likely to begin your trip in either of these countries, the big cities. Vietnam has a classic one-two, the ancient, historical capital of Hanoi and the bustling business hub of Saigon in the south.

However, Thailand is a true power-puncher with the almighty city, Bangkok. The most-visited city in the world for 2018 and 2019, according to Forbes is arguably the most popular backpacker destination in the world and fulfils all your desires.

Vietnam also has beautiful, coastal cities such as Da Nang and Nha Trang but they are all inferior to Bangkok. The city of angels is the pound-for-pound number 1 in regards to cities.

Any experienced traveller will tell you that the highest priority before departing on your trip is to figure out your budget. Thailand is notoriously cheap. You can buy incredible noodles, a Chang beer and a bus ticket to your next destination and still receive change from ten dollars.

Despite these miraculously-cheap prices, they cannot lay a glove on Vietnam’s outrageous costs. Whether it’s a bowl of steaming hot Pho for around $1.30, delicious, fresh coffee for less than a dollar or most importantly, disputably the cheapest fresh beer in the world – it really does tick all the boxes. Vietnam wins this one.

We reach a pivotal round in this contest and an equally pivotal topic for any traveller, food. Thailand recently topped CNN’s Travel World-Best food list with the hugely, popular Massaman curry reaching number one. However, their food isn’t limited to curries! Other mouthwateringly-delightful dishes include Tom Yum Goong, Mango Sticky Rice, Som Tam and the backpacker staple dish, Pad Thai.

Vietnam can reply with a combination of Pho, Bun Cha, Banh Mi, Banh Xeo and Sticky Rice to knock most competitors off their perch. However, Thailand certainly isn’t a novice in the world of food. In arguably the closest round of the contest so far! Thailand just edges it for the versatility of food they offer, despite Vietnam’s slightly cheaper costs.

We move into the penultimate round! A decisive factor everyone has to consider when booking their vacation or backpacking trip, the weather. Both countries have a hot season which usually lasts from March up to July/August, followed by a wet season until October. However, Vietnam’s climate is certainly more diverse than its ASEAN counterpart.

Central Vietnam is impacted by the mountain ranges. The areas surrounding Da Lat are dry from December to March but this is followed by the monsoon season. Whereas, North Vietnam surprisingly has a genuine winter, where the temperature can regularly be single-digit Celsius. You can even spot snow-covered tips of the mountains. For this diversity, Vietnam edge this one.

The final round! Vietnam vs Thailand comparison has been continuing for 7 rounds. Meanwhile, after 7 hours of exploring these beautiful landscapes and cities, you are going to be craving a beverage and letting your hair down.

Vietnam’s nightlife is improving each year. There are more rooftop bars in the major cities and you can go just about any way for a party for an outrageously small fee.

Alternatively, the nightlife in Thailand is infamous for its street parties, red-light districts and notorious locations such as Khao San Road, Nana Plaza and Soi Cowboy. Even if dancing and excessive drinking aren’t for you, you should at least grab a bottle of Chang beer, find a plastic stool and drink in all the festivities that are taking place around you.

Thailand wins on points in an unbelievably close encounter on my Vietnam vs Thailand battle! The country benefits from years of experience and being the pound-for-pound champion of backpacking countries since travelling in this nomadic, bohemian way became popular. A noble effort by Vietnam! But, who knows, maybe a rematch in a few years will see Vietnam capitalise with their ever-growing travel market. 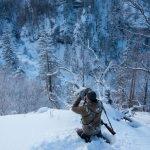 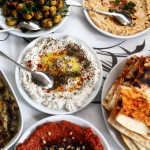